The SC General Assembly returned to the Statehouse this week to vote on the nearly $8 billion state General Fund budget that goes takes effect July 1. Differences between the House and Senate versions were hammered out over the past three weeks by a conference committee.

Unlike Congress, South Carolina legislators deliver the annual budget on-time with no need to pass a ‘Continuing Resolution’ to keep government functioning because of disagreements. Even better, SC’s budget is balanced (we don’t spend more than we take in) and we tuck away the maximum amount allowed in the ‘savings fund’ called the Reserve Account. I will also send you in the near future a rundown of all the legislation that passed and was signed into law this 121st (first year) session. 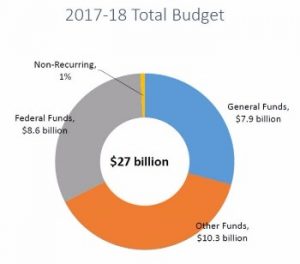 Overall, the state budget totals $27 billion. The General Fund is the smallest portion of the total budget. Other funds include fees and fines, but a bulk of that is pass-through monies for college tuition. The federal portion is money allocated from the federal government to various programs and passes through the state treasury.

Specifically, the General Fund budget that was approved, totals nearly $8 billion. Here are the highlights:

If you wish to review the detailed budget summary, it’s online.

The budget goes to the governor where he may use his line item veto to strike specific allocations. The legislature may or may not return later this month to consider those vetoes. In the meantime, I continue to return to the Statehouse in the off-session to attend hearings for committees on which I serve. As a member of the House Legislative Oversight Committee and Chairman of the Law Enforcement and Criminal Justice Subcommittee, I will be holding hearings throughout the off session months. I use the interim to address constituents request, speak to various groups and prepare our committee for the coming session.